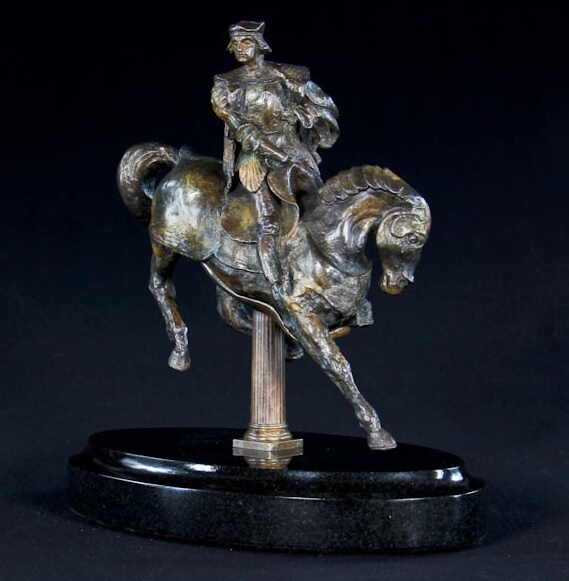 It’s not often you get to be a part of history.  Plenty have played  witness to it, having watched the moon landing, King’s famous “I Have a Dream” speech, or the destruction of the Berlin Wall, but few ever affect it’s course.  At American Fine Arts Foundry, we’re proud to say we have.

In fact, with the production of Leonardo da Vinci’s “Horse and Rider,” we’re quite literally making history. Once thought lost to time, “Horse and Rider” is the artist’s only known wax sculpture to have survived antiquity. Carved in the image of Leonardo’s friend and patron, Charles d’Amboise, and thought to be held through the centuries by Francesco Melzi, Melzi’s descendants, and eventually private collectors in England. The wax was eventually molded, and it’s from this mold of the original Leonardo wax that AFA created the single original Horse and Rider bronze. From that bronze, two 2nd generation molds were created. Only one bronze original was created from the mold that was formed from the Leonardo wax model making it a very rare piece of history.

Richard Lewis, owner of Da Vinci’s “Horse and Rider,” chose American Fine Arts as the exclusive foundry to produce this once in a lifetime work of art because he recognized both our passion for what we do and our commitment to complete artistic integrity.

At American Fine Arts we have some of the most talented people in the industry, averaging nearly 23 years experience across the board. We’re a team of professionals who take great pride in reproducing every stroke, every detail, and every nuance of our artist’s work.  And while producing work for some of the most talented contemporary artists in the world is an honor, there can be no higher honor than producing bronzes for one of the greatest artists in history, Leonardo da Vinci.

So it’s with great pride, and no small amount of humility, that we produce this once in a lifetime, limited edition of Leonardo da Vinci’s work, “Horse and Rider.”  For more information on the provenance of “Horse and Rider,” along with information on how to make your purchase, please visit www.davincihorseandrider.com.